FILM BRIDGE – BELARUS. A directing and scriptwriting programme for filmmakers from Belarus 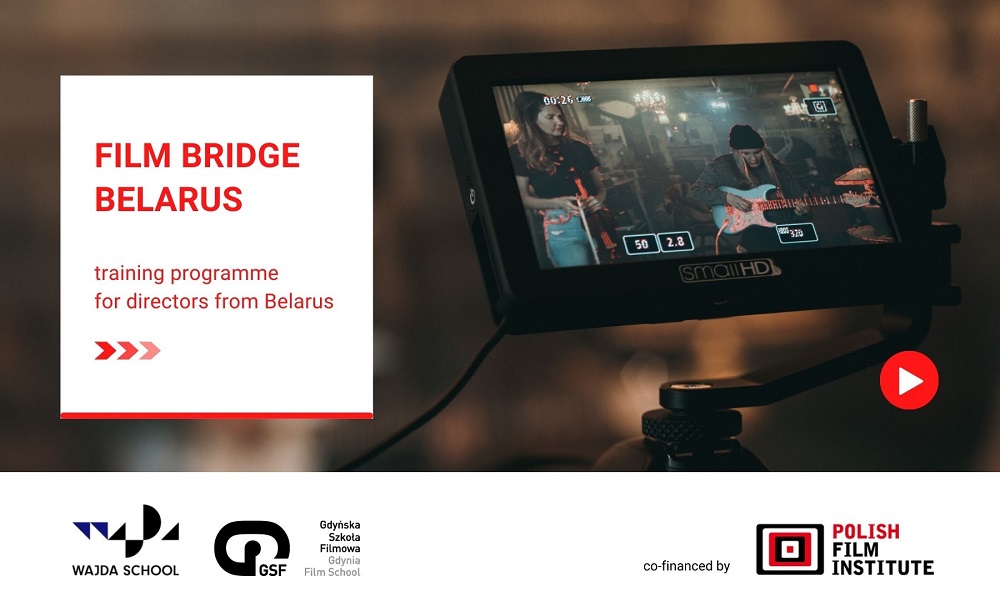 Are you a citizen of Belarus? Are you looking to develop your own feature film or documentary project? Check out the new programme run by the Wajda School and Gdynia Film School! Applications deadline: 27 October 2021.

Film Bridge – Belarus is a proprietary programme of the Wajda School, run in conjunction with the Gdynia Film School, which aims to develop the film projects of young Belarusian filmmakers.

The programme is open both to people who are still waiting to make their directorial debut and also creators who have already made their first full-length feature or documentary films. During the selection process, in addition to your current film experience, the most important thing will be the idea you have for the film you would like to develop during the programme.

For 7 months – from December 2021 to June 2022 – six young creators will work on the development of their own projects, both fiction and documentary films, together with experienced Polish filmmakers.

The programme is based on group activities, practical workshops and individual work on your own project under the supervision of a tutor. During online sessions and on-site workshops, under the supervision of lecturers from the Wajda School and Gdynia Film School, you will work on your treatment, learn how to work with an actor and shoot a selected scene from your project, which you will then edit and analyse during classes. Programme participants will also take part in the shooting of a short documentary project.

The intended final result of the fiction part of the programme is a detailed treatment or first draft of a feature film script, as well as a scene from the resulting text shot with actors, so that each participant completes the programme with a package they can use to look for a producer and attempt to get their project off the ground. With the documentary projects, the result will be a short exercise or documentary.

Who is it for?

It’s for feature film and documentary directors, as well as scriptwriters and cinematographers who are looking to become active in the field of directing. Applicants for admission to the programme must have Belarusian citizenship and speak either Polish or English.

The application must include:

The materials must be prepared in Polish or English.

Applications deadline: 27 October 2021
Recruitment details: https://wajdaschool.pl/en/film-bridge-belarus/
Do you have any questions? Write or call us!
Tel.: +48 500 248 506; email: filmbridge@wajdaschool.pl

The Wajda School has been educating young generations of filmmakers for twenty years, in accordance with our motto: We believe that film can change the world. We believe in wise, ambitious auteur cinema. That’s why we help young filmmakers to make movies. We create optimal conditions for the preparation of a professional debut. Experienced cinema people (directors, scriptwriters, documentary makers, producers) work with students on the best artistic vision of their own projects – from the script development stage, through documentation, photography, production and post-production, to the presentation of the film on the market. www.wajdaschool.pl

Gdynia Film School was founded in 2010. The mission and main goal of the school’s activity is the reliable, solid and professional education of future film and documentary filmmakers who are aware of what the profession of director involves. The teaching of major subjects is based on practical classes, while the necessary theoretical lectures are the starting point for a series of exercises, workshop rehearsals and the creation of film scenes and etudes. Classes in small groups enable individual work and direct, substantive contact with the lecturer. www.gsf.pl

The FILM BRIDGE – BELARUS programme is co-financed by the Polish Film Institute.