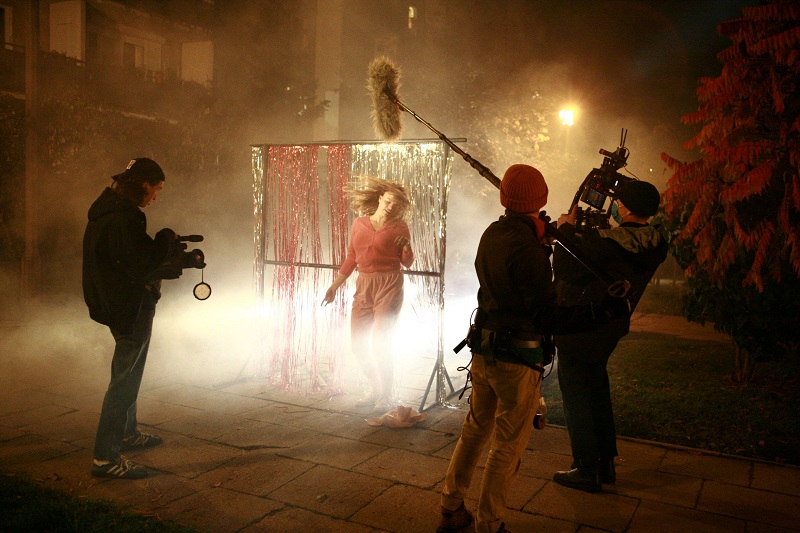 EKRAN+ 2020 has come to an end! Participants of nine teams from Poland, Switzerland, Croatia, Lithuania, Austria and Spain came to Warsaw for the third time to shoot the second of their workshop scenes.

It was a very busy time filled with screenplay analysis, consultations, rehearsals and finally shooting on film sets. This year’s session was held in compliance with all safety rules related to the restrictions introduced in Poland in connection with the COVID-19 pandemic. Some of the classes and consultations took place online, and the number of people present on the film sets was limited to create safe working conditions for participants and film crews.

At the last session, directors had the opportunity to invite cinematographers and actors from their countries to cooperate. Each of the teams consulted the script of their scene during individual talks with Margaret Glover, Antoine Jaccoud and Pierre Agthe and developed their ideas with tutors: Wojciech Marczewski, Denijal Hasanović and Udayan Prasad. The highlight of the last session was a closed, on-line master lecture by Volker Schlöndorff, prepared especially for EKRAN + 2020 participants.

After the hardships on the shooting sets, it’s time to celebrate together – this time online, but we hope to meet you live next year!

See a gallery of photos from the third EKRAN + 2020 sessionby Agnieszka Patela on Facebook EKRAN+! An idealistic teenager enamored of art is involved with a crazy Internet fraud to help his gambling father, while escaping poverty. Unaware that, all along, he was a part of a group of teenagers who will change the course of history. A couple in their late twenties move in together into a seemingly perfect apartment, but the building’s renovation shatters the illusion of perfection. Two brothers lost in the mountains will have to learn to trust each other in order to survive. The higher up the mountain the more treacherous the path. Julia (30), a lifeguard at an open air swimming pool looses her father and her boyfriend. In an attempt to overcome her pain she joins a gun club where she commits violence that alienates her from her friends, but demands from her to finally have courage to walk her own way. In declining communist Poland, two young boys set up the first Polish independent television that integrates the local community, but ends up ruining their friendship. Liza is a young girl from Ukraine who is afraid of independence. She falls into a strange relationship with the mother of a boy she accidentally met. In the absence of his fiancée, she begins to live a life that is not her own.